The Balipara Social Recognition Awards introduced by the Balipara Foundation in 2013, stands as a platform to reward and encourage the efforts of grassroots conservationist and social entrepreneurs working tirelessly towards preserving the rich biodiversity of the Eastern Himalayas. 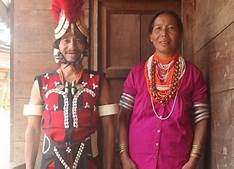 Protecting the wildlife of Fakim Sanctuary Forest Rangers & Guards of The Eastern Himalayas Awardee Alemba Yimchunger is an inspirational nature lover who goes beyond the call of duty to preserve nature. The Award was presented by Alistair Morris. Shri Alemba Yimchunger has been a camp guide in the Kiphire Wildlife Division in Nagaland. He has made a wide-ranging impact by radiating his conservationist nature to not only the people of his village but villages which are adjacent to his as well. His efforts have made sure that the pressure on forest resources are reduced in the Fakim Wildlife Sanctuary. Because of his involvement in the region, his extensive knowledge has been useful to understand the movements of animals in and around the areas or the forests – allowing camera trap studies to take place. Alemba has been a part of the Anti-Poaching Page 3 of 4 squad as well, helping to secure the Fakim sanctuary which has been an integral part of the India- Myanmar border. Forest Rangers & Guards of The Eastern Himalayas Awardee Dorji Wangchuk has contributed to social development of forest fringe communities around the Royal Manas Park and helped Bhutan realize its goal to double the tiger population by 2020 by preserving the animal. Award was presented by Aneeta Dutta.

As a Senior Forest Ranger, Mr. Wangchuk has spearheaded many livelihood activities in the Royal Manas National Park. Due to his efforts, Bhutan has been able to realize the need and the goal to double the tiger number by 2020. Mister Dorji put multiple feathers on his cap by trying to balance not just the number of tigers in the Royal Manas National Park but also help the forest fringe communities to implement livelihood activities, ecotourism and environmental education. Mountaineer and Himalayan lover, Dr. Anshu Jamsenpa, our Special Awardee Eastern Himalayan Global Environmental Ambassador, is the only woman in the world to ascend Mt. Everest twice in 5 days. The Award is presented by Dr. K. K. Sarma.

As an adventure enthusiast, Anshu began her journey back in 2009 with the utmost motivation and guidance of the Arunachal Mountaineering and Adventure Sports Association to take up Mountaineering. There are moments of realization and Anshu realized that her passion for mountaineering will never diminish while attending her advanced course. Her deterrent was only one factor in particular – that she was a woman. But, not letting negativity affect her, she went on to do something different. In 2011, Anshu conquered the 29,029 ft. peak for the first time and did it once again in a span of 10 days. Anshu headed back to Everest for the third time in 2013. However, it was her ‘double ascent’ in 2017 that made her the only woman in the world to achieve the feat within five days!

Tata Education and Development Trusts have associated themselves in view of the Sports Development of the state of Mizoram. The Siphir Village Council has been generous enough to provide the project with Page 4 of 4 10.753 acres of land to provide the grassroot youth with vigorous badminton training in a High-Altitude Training Centre. The Annual Balipara Foundation Award is accorded to Mr. Maksudur Rahman for social impact in Bangladesh and preserving the bio-cultural heritage of the Sunderbans through his organization Bangladesh Environment and Development Society. The Award was presented by Mike Korchinsky. Mister Rahman is an environmental leader representing Bangladesh with more than 18 years of work experience cutting across various fields such as environmental protection, wildlife conservation through education, advocacy, awareness campaign and livelihood improvement of the forest dwellers through sustainable use of natural resources. As the founder of the Bangladesh Environment and Development Society, Mister Rahman was able to bag the prestigious Divisional Environmental Award for 4 consecutive years. He has been extremely successful in demonstrating leadership qualities through 40 implemented projects alongside more than 10 published books and journal papers/newsletters. As the ADO of Balipara, Md. Arif Hussain has shown keen interest in providing help and reaching out to 1209 households of these villages. He wishes to extend his department’s expertise in the field of integrated farming models, combining different types of agricultural activities such as fishery to generate livelihoods of the people. He has envisioned Balipara to be ‘High Tech’ with the availability of technologies and services in the form of Farm Machinery Bank or GreenHouse for farmers. Naturenomics™ Awardee Narmohan Das has pushed the boundaries of sustainability by propagating the production of Ahimsa Silk and creating a circular economy within the silk industry. The Award was presented by Haiya Zhang.

With the vision of fulfilling bulk orders regarding the demand of Ahimsa Silk, Shri Narmohan Das began promoting and producing by involving 750 households single handedly in the entire process. He was able to envision the success of producing Ahimsa Silk, keeping in mind the environmental advantages of not killing the silkworm – thus subsequently leading to the multiplication of eggs. As an environmental steward, he has not only pushed the boundaries of sustainability along with creating the concept of circular economy within the silk industry. Food For the Future Award

Dimbeshwar Rabha is accorded the Food for the Future Award for his innovative idea of growing black pepper as an alternate source of livelihood through “Small Farm Integration for Sustainable Agriculture and improved access to market” project. The Award was presented by Jackie Leitch.

Rabha has been a part of an integral project – ‘Small Farm Integration for Sustainable Agriculture and Improved Access to Market’ – funded by Tata Trust. The impact that resonates through his project cuts across the three very important aspects of socio-economic mobility keeping in mind environmental sustainability. He has been able to create a team who has acquired his knowledge management skills regarding multiple cropping and demonstration of farming along with the most relevant mode of business – in black pepper and turmeric. Some of Dimbeshwar’s innovation can be visibly seen in the usage of forest wastelands for cultivation. The idea of black pepper being grown as an alternate source of livelihood has been extremely remunerative helping the people of the communities to address the needs of meeting their basic amenities. Tambor Lyndoh is accorded the Eastern Himalayan Conservation Award for his contribution towards socio-economic development of forest fringe communities of Mawphlang, Meghalaya. A true Earth Hero of the Eastern Himalayas, he has successfully erected monoliths in Bhopal similar to the ones in Mawphlang Grove. The Award was presented by Prof. Sunayana Sarkar, NMIMS.

Mister Lyndoh’s humble nature allowed him to build a rapport with communities at the grassroot level. He has provided a helping hand to over 30 researchers, both in India and abroad. As a prominent figure in the Tourism and Conservation department of the Mawphlang, Meghalaya – his omnipresence has led to the cultural and educational development of the communities within these forested regions. Most interestingly, he took the initiative to help settle the office protocol in order with the consent of the Cabinet of Lyndoh and Myntri. Another one of his achievements include the erection of a monolith in Bhopal, similar to that of the monoliths in Mawphlang Grove, thus establishing his region and representing the Eastern Himalayan region of India. Currently, he has been chosen to be a member of the Expert Committee Meghalaya Biodiversity Board and the Asian REDD working group. Allowing a safe passage to gentle giants in one of the most affected human-elephant conflict zones, Udalguri, tea planter and Habitat Conservation Awardee, Tenzing Bodosa has begun a silent revolution by producing Elephant friendly tea. The Award was presented by Thu Zaw.

Tenzing Bodosa has begun a silent revolution in his own little way by producing elephant friendly tea, in the very heart of Udalguri district, Assam. He made this possible by allowing the gentle giants to be a part of the two farm lands where most of his work takes place. The success of Tenzing’s business has reached the mark of INR 60 – 70 lakhs from the time he started to work on his ancestral farms, that is, when his father passed away at the age of 10. As the years went by, the entrepreneurial nature of Tenzing led him to think of the produce which had the highest demand in Assam – tea. With the help of small and other types of tea growers, Tenzing began to grasp the dynamics and nuances of tea plantation. The beginning of his organic tea industry in Udalguri, back in the year 2007, never turned back and is now world renowned. The first Indian lady to do a Wildlife and Research Management course, Lifetime Service Awardee, Usha Lachungpa is a Green Crusader carrying forward the bio-cultural heritage of the Eastern Himalays through knowledge and awareness. The Award was presented by Diana Owen.

Usha Lachungpa is a South Indian by birth and hails from Mangalore, Karnataka. She completed her education from Bombay University and is a Life Member of the Bombay Natural History Society. She has worked extensively in the field of wildlife, which developed as an interest during her childhood. To broaden her horizon and help the land from where her husband was from, in 1980 Usha decided to move to Sikkim. She also dreamt of raising her family in the peaceful high altitudes of the Himalayas, and her success is in the form of both her daughters working in the tangent of wildlife conservation.

Usha Lachungpa has extensive experience as she has worked with the Bombay Natural History Society as a field biologist on a Hydro-biology project in Keoladeo National Park and the Endangered Species project looking for critically threatened Lesser and Bengal Floricans in 15 Indian states. She also holds accolades for being the first Indian lady to do a Wildlife and Research Management course from Wildlife Institute of India in Dehradun, securing one gold and two silvers for her research during her post graduate diploma.

Knowing the amount of impeccable work done by Usha Lachungpa, she continues to be a pheasant members of the Specialist Group of IUCN, Life member of the Zoo Outreach organization, founder member of the NGOs such as Green Circle, Sikkim and Sikkim Ornithological Society. The Green Journalist Award is accorded to Honorary Wildlife Warden of Kaziranga, Uttam Saikia for educating the forest department through his knowledge and a deep-rooted empathy towards the World Heritage site. has begun a silent revolution by producing Elephant friendly tea. The Award was presented by Prof. Misako Namiki, Teikyo University.

Uttam Saikia is an Honorary Wildlife Warden of Kaziranga. He has formed a non-governmental organization named “BHUMI”. As a conservationist with a journalist background, he has an immense amount of knowledge and a deep-rooted empathy towards the Kaziranga National Park. Saikia garners his strength from being humble and his ability to work with people from different fields – NGOs, communities, politicians, bureaucrats and the youth. His engagement with the forest department encompasses issues that involve man-animal conflict, welfare, staff in the frontline, capacity building and awareness programs. Uttam played a major role in motivating 10 poachers to surrender in the year 2010, before the then Director of Kaziranga National Park. His landmark achievements also include significant of wildlife awareness work being done in Majuli and also the Centre for Wildlife Rehabilitation and Conservation of Borjuri.